Yamaha continues to expand features of its remarkable Arius line of digital pianos, with the new YDP-142 and YDP-162. These new Arius models, which will be unveiled at the 2013 NAMM Show, offer users a digital alternative to an acoustic upright piano for the home and are suitable for pianists ranging from beginner to intermediate, respectively.

Both the YDP-142 and YDP-162 provide unique benefits, including dual headphone jacks that allow two pianists to sit at the bench to practice or play in total privacy. Intelligent Acoustic Control automatically adjusts EQ to your preferred volume setting, ensuring the absolute best tone at any playing level. A two-track song recorder allows players to practice with one hand while the Arius plays the other, at a comfortable tempo the player can select. 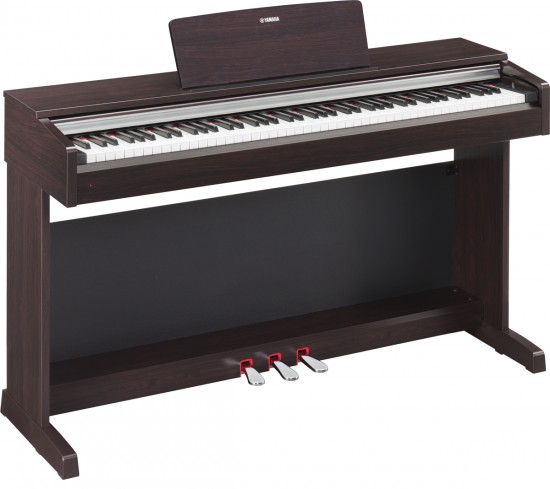 "The USB HOST port brings these Arius models into a new level of connectivity," said Dane Madsen, Yamaha Digital Piano Marketing Manager. "Yamaha apps like Piano Diary, NoteStar and Visual Performer make for a fun pairing with the optional iUX1 iPad cable. Now you can learn, record, share and see your music in ways that were unthinkable just a few years ago."

Using a special design and position within the instrument, the Acoustic Optimizer physically adjusts the acoustical flow, which controls resonances and enriches the overall sound. Available in either rosewood or black walnut finishes, customers can choose between the Arius YDP-142's 32" cabinet or the taller 33" cabinet of the more upright YDP-162. Additionally, both models feature Duo Mode, which splits the keyboard into two 44-note keyboards each with their own middle-C, perfect for side-by-side or group practice environments.

The GH action with Synthetic Ivory Keytops, available with the YDP-162, gives players that classical piano touch and provides a moisture-absorbing surface for sustainable comfort during extended playing sessions.