The new M3 Music Workstation/Sampler represents the third generation of Music Workstations from Korg, the company that invented the concept. It inherits elements from the flagship OASYS, distilled into an affordable music production package with a new tone generator, a wealth of innovations and new sounds.

This new chip-based synthesis system, EDS (Enhanced Definition Synthesis) shares much of the OASYS’ HD-1 lineage including low-aliasing oscillators, a powerful new filter topology, detailed envelope generators, plus a Drive parameter and AMS Mixers. All second-generation KARMA functions from the OASYS are included. 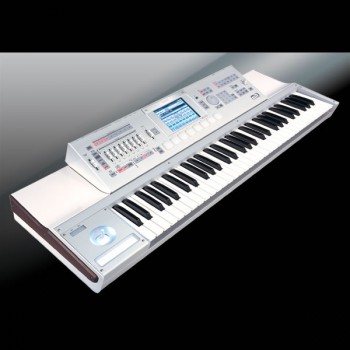 256 MB of ROM incorporates the "best-of" OASYS ROM into a new soundset. 512 Programs and 384 Combinations are onboard, with space for 1,664 Programs and 1,792 Combinations. For increased power, the EXB-RADIAS expansion board adds a 24-voice, single timbre version of the MMT synthesizer used by the RADIAS and R3 synths.

The color TouchView™ display doubles as an X/Y pad for controlling synthesis and effects parameters, while changing colors in response to movements. The M3 features the same type of real-time control surface as first featured on OASYS — eight sliders and switches for tweaking internal sounds, mixing tracks, interacting with KARMA, controlling external hardware and more. Eight velocity-sensitive pads can be used to trigger notes, chords and controller messages for a variety of applications.

An all-new Drum Track feature provides user-programmable drum grooves to jam with in Program and Combi modes, integrating with KARMA, or song-writing. Over 500 patterns with a natural sound and feel are included.

Bundled Editor/Librarian software works stand-alone or as a plug-in within host software via USB MIDI. Additionally, a new EXB-Firewire option enables the M3 to interface both audio and MIDI with a computer using a single cable.