As the keyboardist and pianist in one of the most successful and highly acclaimed British bands of the last 40 years, Tony Banks knows exactly what he needs from technology. The task of recreating the sounds from hit songs written in the past on decades’ worth of vintage equipment has not been a simple one, but Korg’s flagship workstation, the OASYS, is Tony’s secret weapon. “Most people think I’m still using the old instruments, which really is a good thing!” laughs Banks, reflecting on the fine job his OASYS keyboard workstation has been doing on the massive tour. 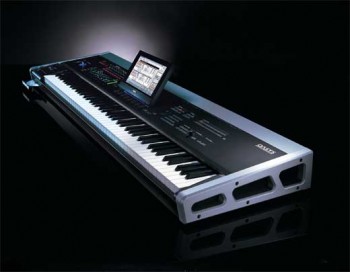 Not one to hang onto his vintage gear, Banks originally intended to recreate his classic sounds using virtual instruments running from a dedicated rack-mounted computer, but he decided that the OASYS – offering a selection of several different synthesis types within the one box – was a much better bet. “It is something of a coincidence that I happened to come across it at this particular time,” he continues. “I was looking at something to power my virtual instruments and went as far as buying the hardware, but when I started fiddling around with OASYS, I realized that I didn’t need the other system. I trust the OASYS more, because it’s a complete system. Obviously you can plonk your own sounds in as well; I’ll probably move my entire library of samples across eventually.”

Banks’ live setup employs three keyboards, two of which are merely controllers, set up to play the sounds stored in the OASYS. For each song, the relevant sounds are split among the three, enabling Banks to instantly access whatever he needs without too many button presses. He also appreciates how data from one OASYS can be moved to another, increasing the system’s overall reliability. “It has been remarkably reliable. We have two of them on tour, and the great thing is that you can swap the disk across and it’s absolutely the same!”

Banks continues, commenting on the OASYS’ versatility and ease of programmability: “It is very versatile in that it allows you to use a multitude of independent effects on all the different sounds and combine them in various ways. I’ve never used a programmer; I’ve always done it myself because that’s part of the fun. But then there were a few synths I was using that changed the way I thought because they were desperately difficult to program. I have found that with the OASYS I have got back into modifying the sounds much more, and that’s part of the creative process.”

For more information on Genesis, visit the band’s website at www.genesis-music.com.