Casio has expanded its well-known Privia digital piano line with the introduction of the Privia PX-780. It joins the robust Privia lineup of digital pianos featuring a refined all-in-one cabinet design. The PX-780 will be exhibited in Casio’s booth (#5900) during Winter NAMM at the Anaheim Convention Center, January 24-27, 2013.

“We are extremely proud of the new generation of Celviano digital pianos, which offer exceptional sound quality and unmatched features for both beginners and experienced professionals." said Stephen Schmidt, Vice President of Casio’s Electronic Musical Instruments Division. "With the development of our new AiR technology and the additions to the Celviano line, Casio demonstrates the great progress it has made in the music industry.” 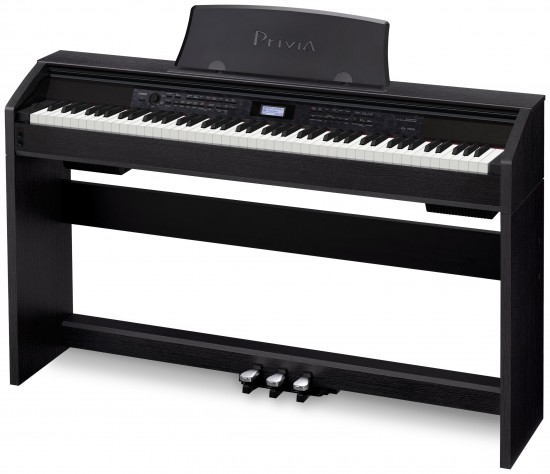 As the newest addition to the overall Privia line, the PX-780 features Casio’s proprietary sound source, “AiR” (Acoustic and intelligent Resonator) which delivers unmatched realism and detail. Utilizing over three times the waveform memory of the previous generation, the AiR engine provides sensational dynamics, damper resonance and even compensates for the speed at which hammers strike strings at different velocities and key ranges.

Equipped with a redesigned 88-note Tri-sensor Scaled Hammer Action Keyboard, the PX-780’s simulated ebony and ivory textured keys reproduce the touch feeling of an acoustic piano while the scaled weighted action keyboard provides the depth and integrity of an acoustic piano.

In addition to acoustic piano sounds, the PX-780 has a total of 250 built-in tones including strings, brass, guitars, basses drums and more. Casio’s PX-780 also features full ensemble capabilities with 180 rhythms with full accompaniment, allowing the user to play along with drum patters or a full backing band. The full range of tones and rhythms can be used in combination with a 17 track recorder for composing songs. Compositions, rehearsals, performances and moments of inspiration can easily be captured and shared as a 44.1kHz.wav file directly to a USB thumb drive.